At Kanjo we’ve been asked if we can measure emotional responses to static content.

The question is more one of “does static content generate emotional reactions?”; rather than can we measure it.

To answer the question we ran a study across static content from three brands in different industries – all aiming to be thought provoking in their own way. The adverts we selected were from WeightWatchers, Pepsi and WWF. Each advert was shown to the same number of participants for 10 seconds.

Here are the adverts we included in the study. 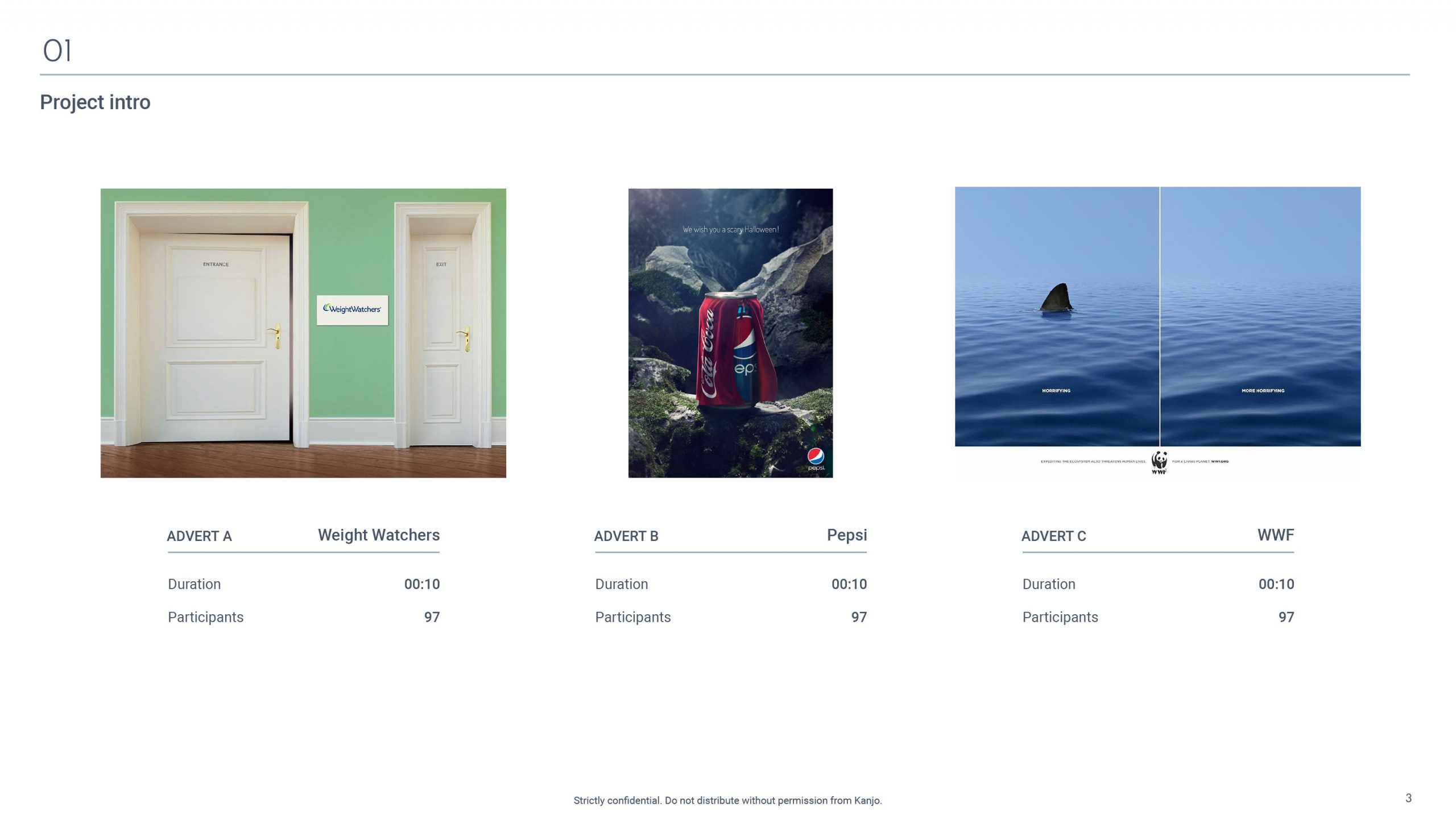 Note: This study is part of our research programme and wasn’t carried out with, or endorsed by, any of the brands mentioned in this article.

At Kanjo we measure metrics of Attention, Engagement and Cognitive Load. These are wrapped up into a single performance score, the Kanjo Index. You can see how each advert scored below. 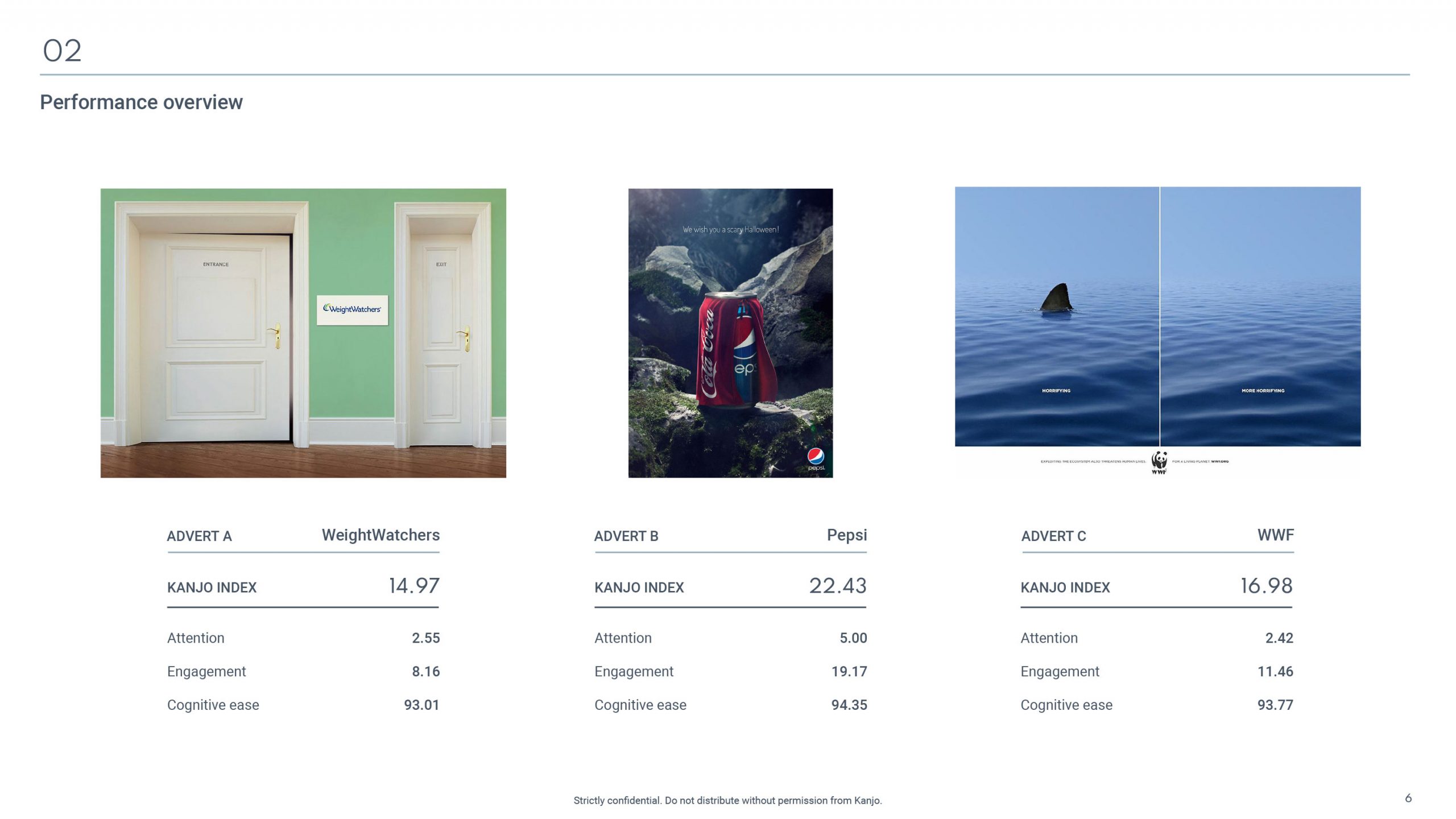 When measuring Engagement to static adverts we’re looking for peaks in as sustained Engagement over the course of the viewing length. The Pepsi advert was found to be significantly more engaging than the others. Engagement charts for the three adverts are displayed below. You can see that the Pepsi advert had both the highest peak and sustained level of Engagement. 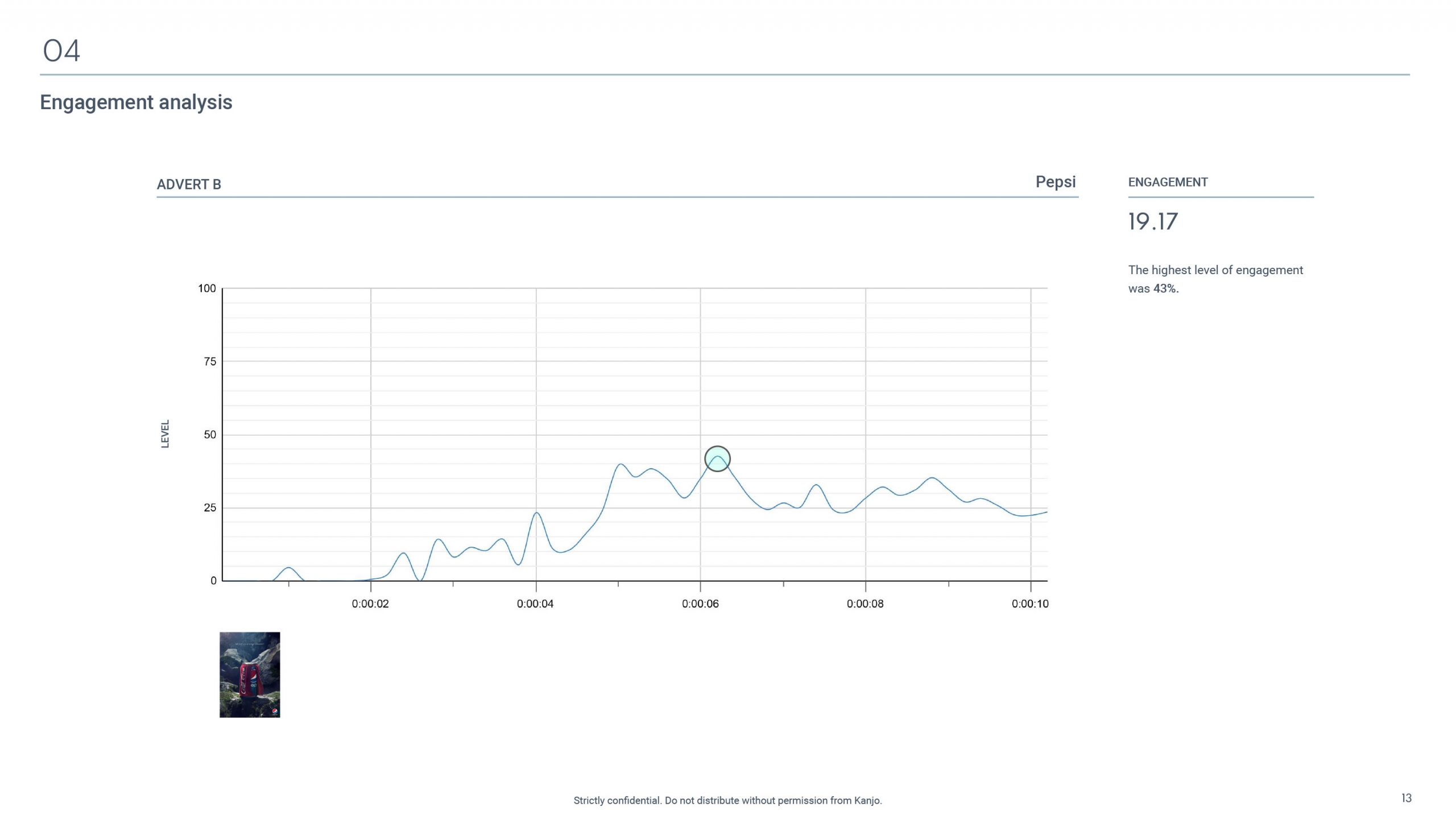 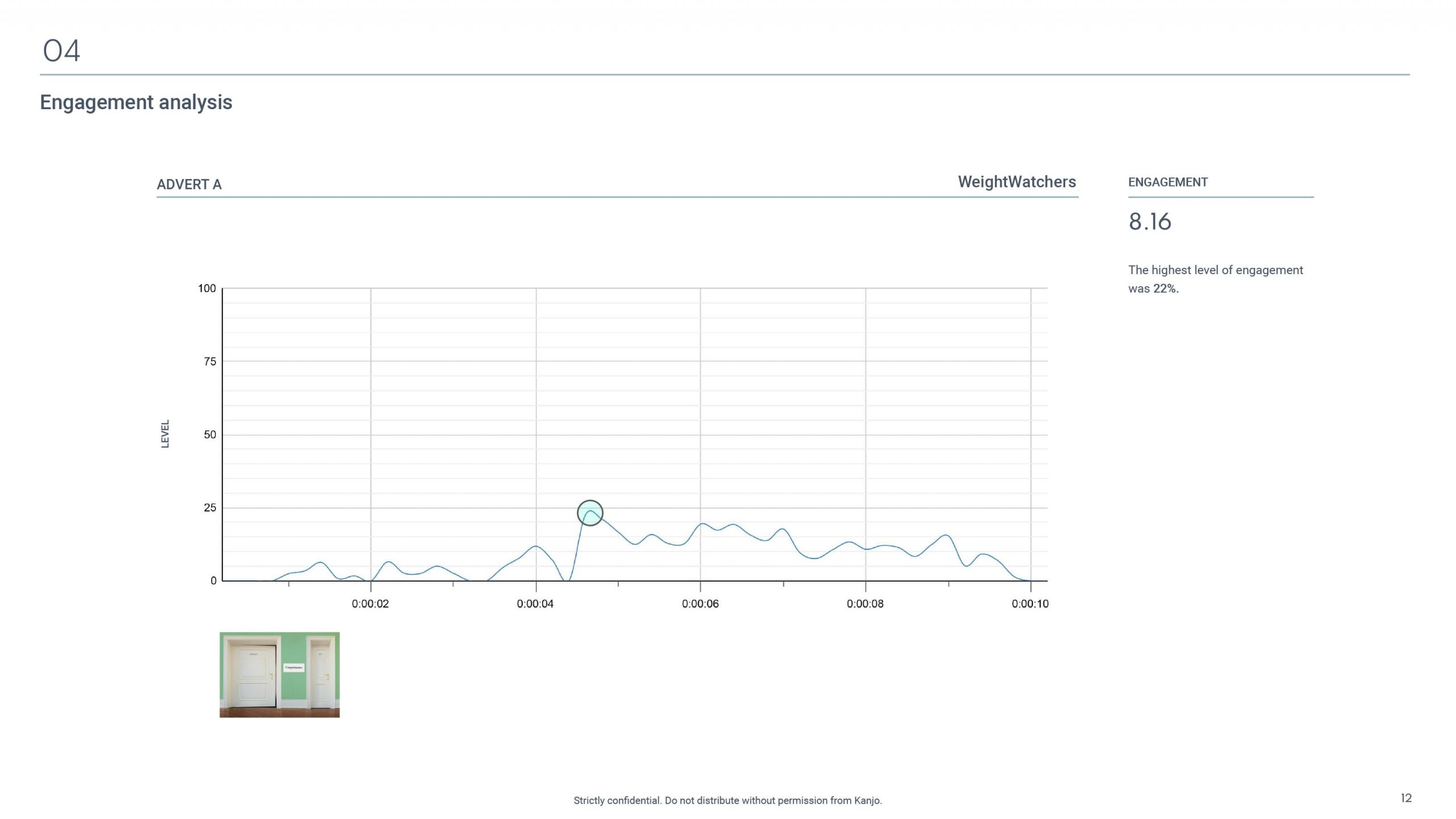 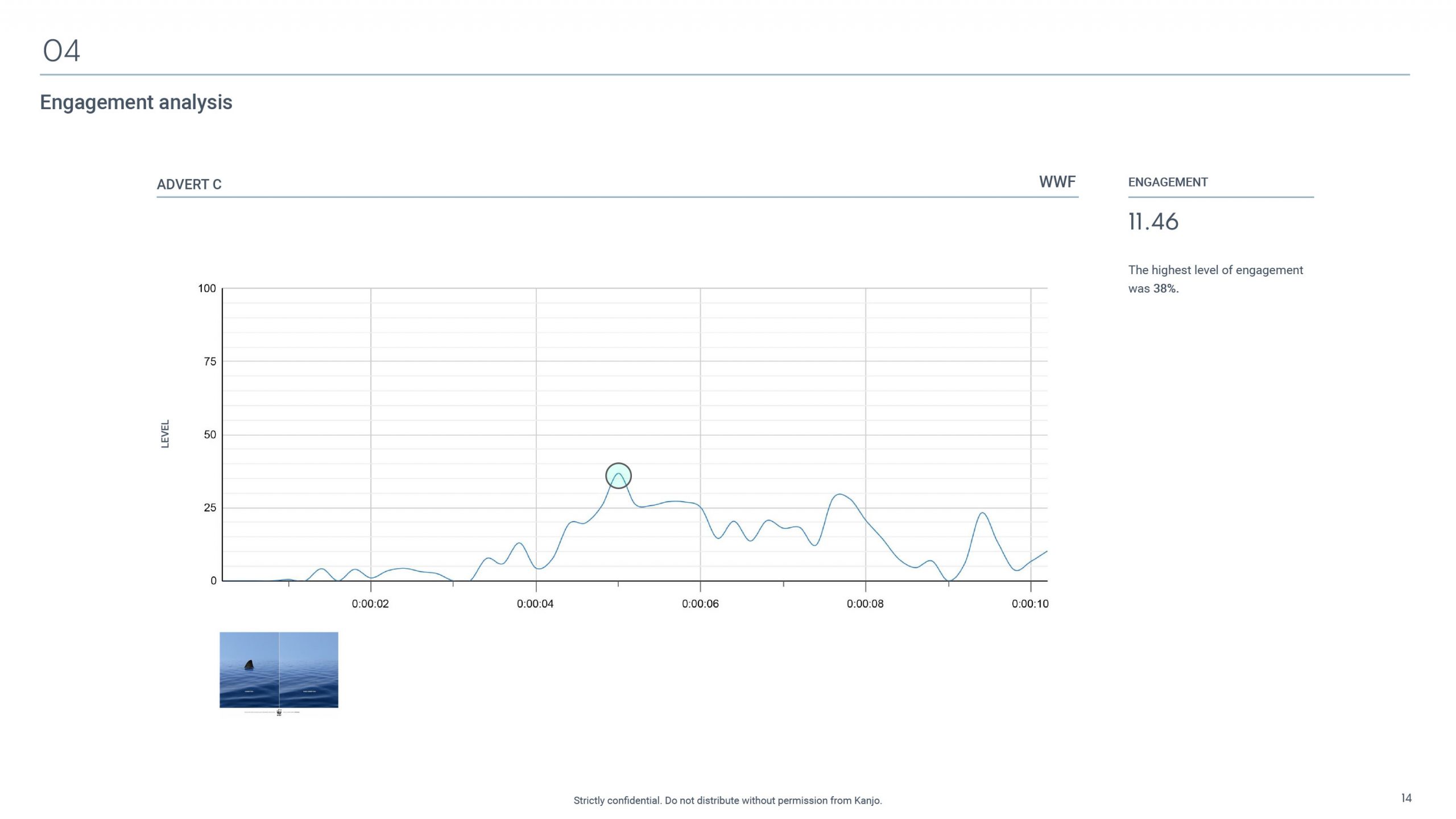 Any content requires a level of mental effort to understand. We measure this with Kanjo’s Cognitive Load metric. Cognitive Load is generally scored low (unless your marketing content is really hard to understand!), so we’re looking at small but significant differences here.

Again, Pepsi came out on top. However given the context of thought provoking adverts, it would be fair to say that WWF performed to a strong level — in that it’s making the viewer think, but not too much. With that in mind Cognitive Load is weighted lower within the Kanjo Index than the other metrics. 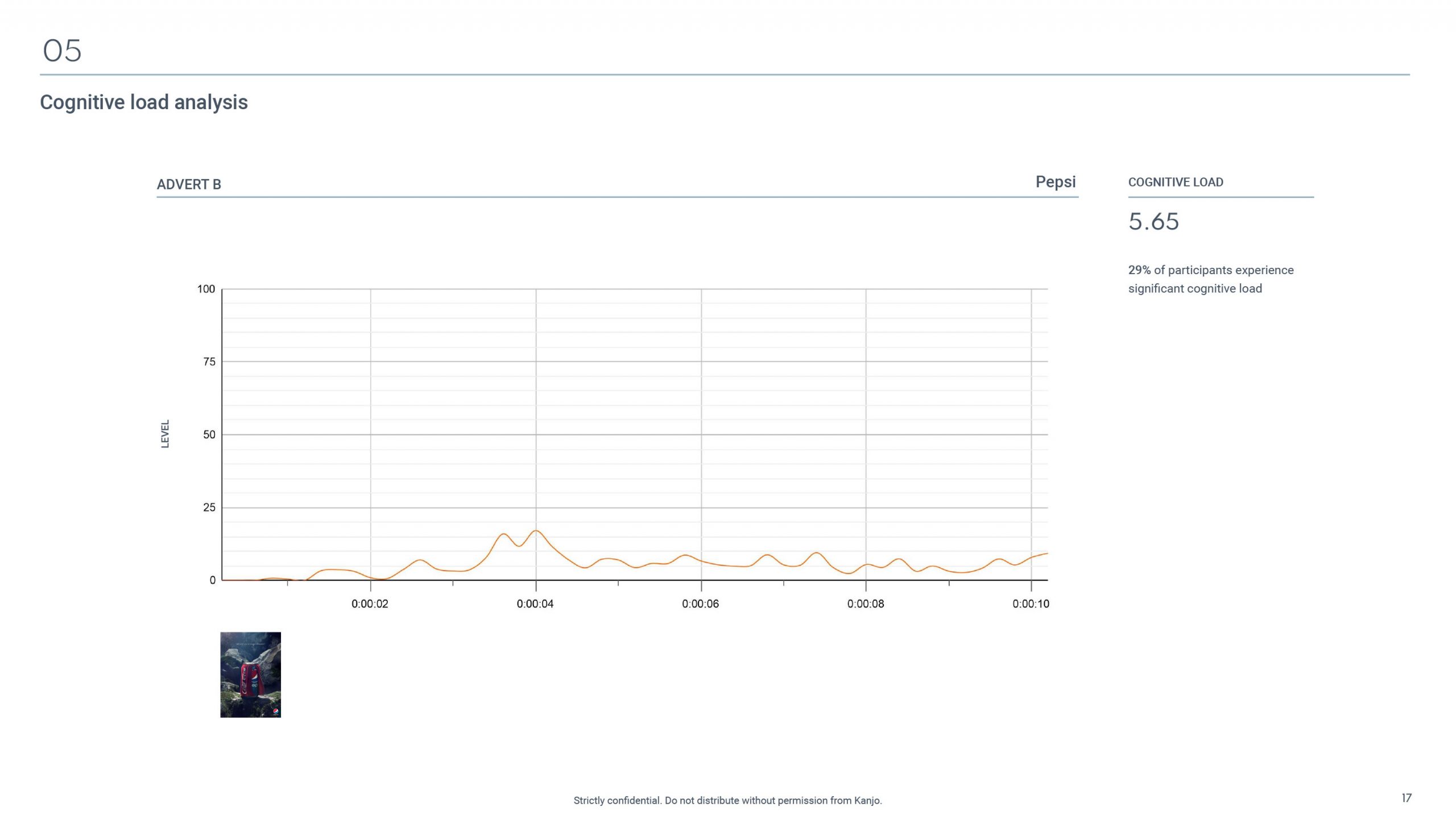 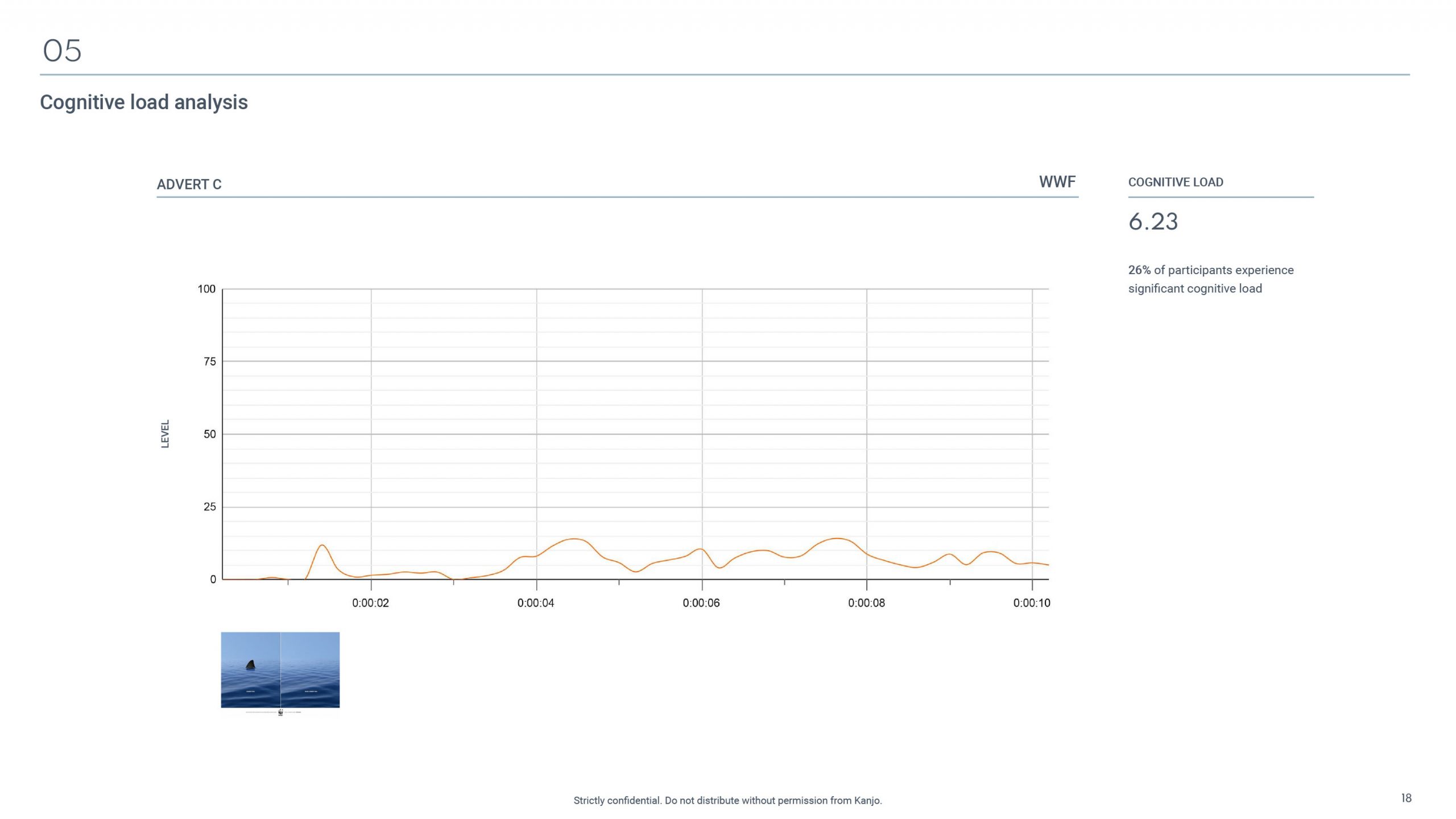 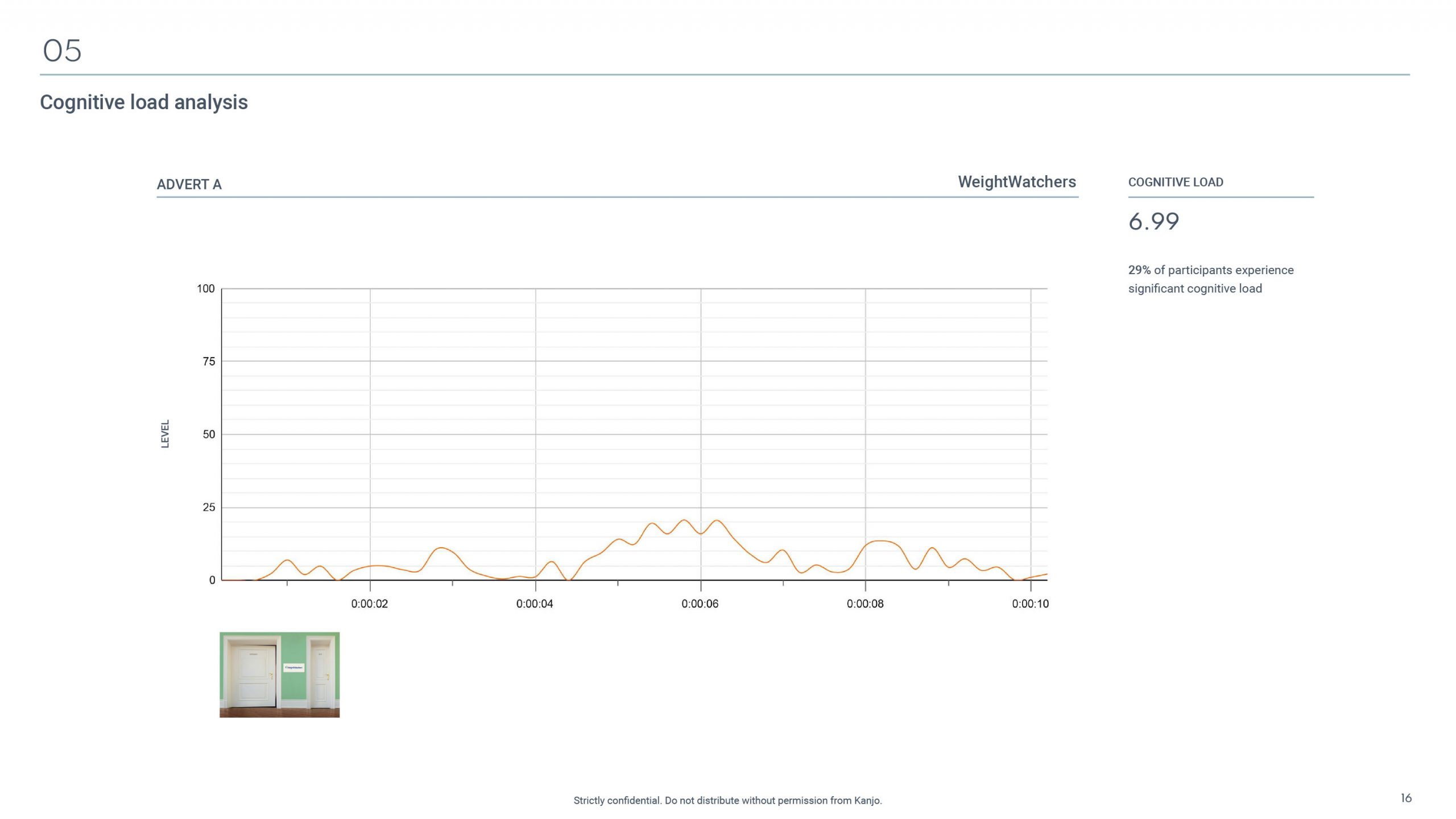 Note the sustained peak of Cognitive Load within the WeightWatchers advert. 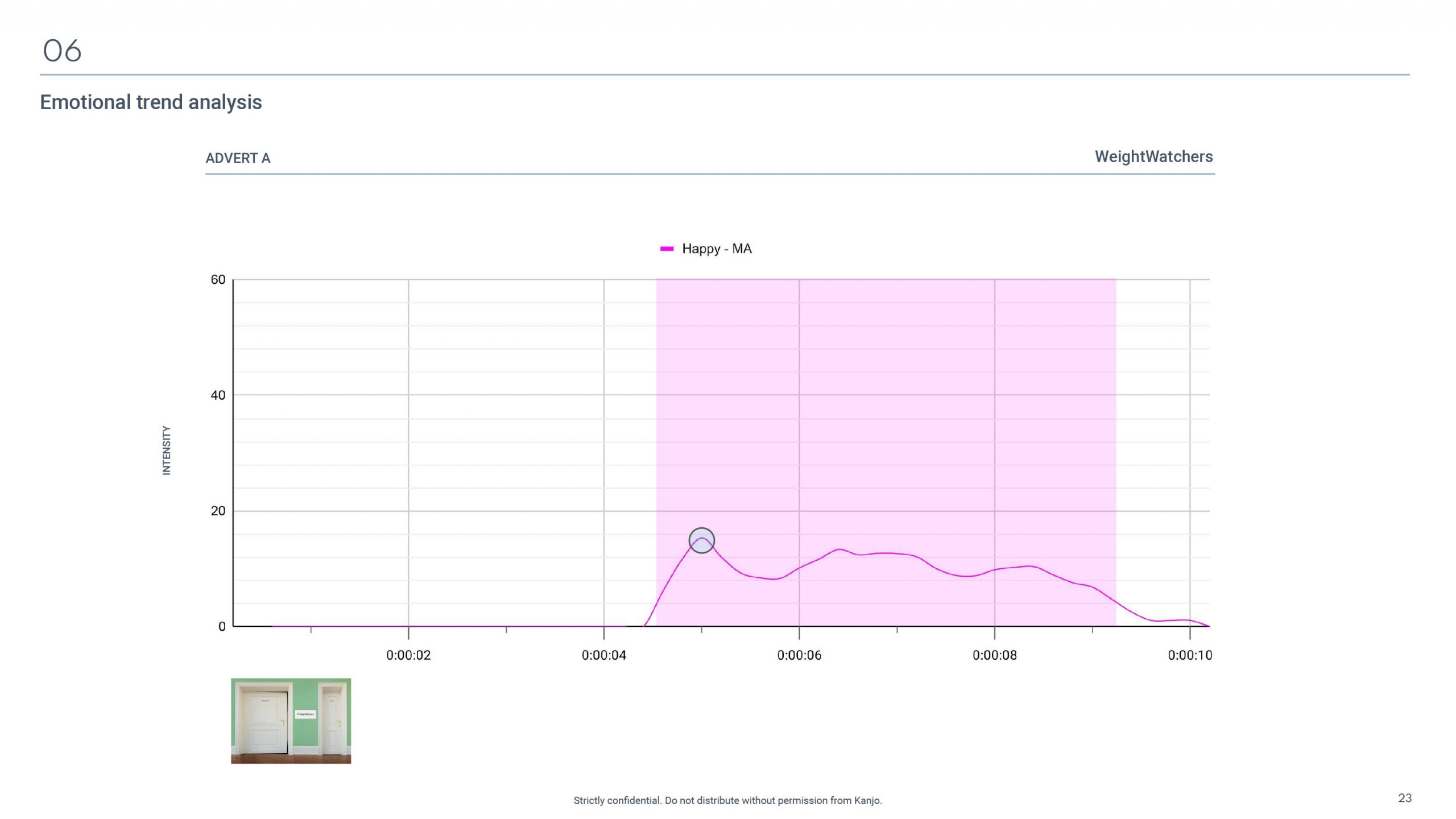 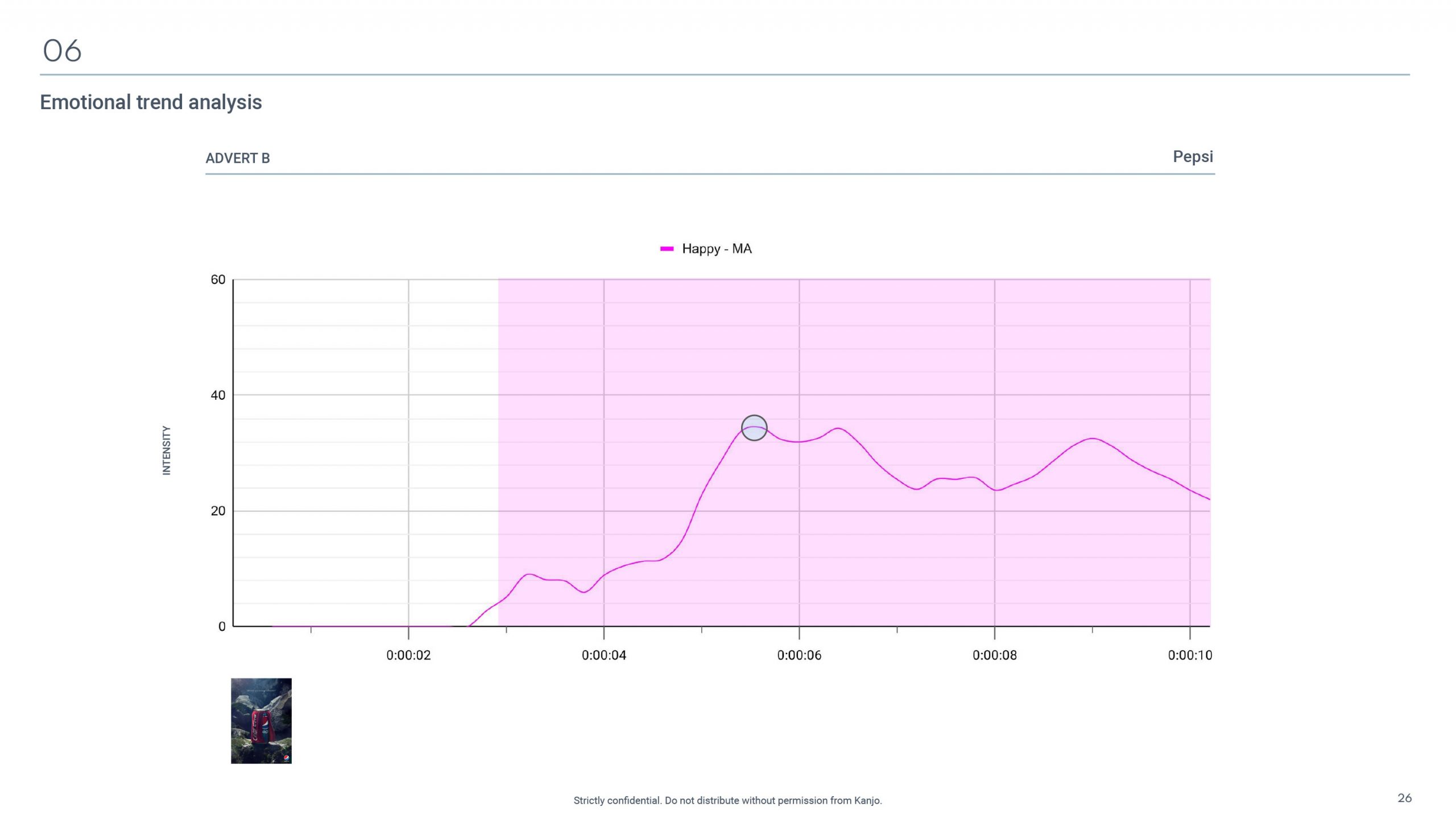 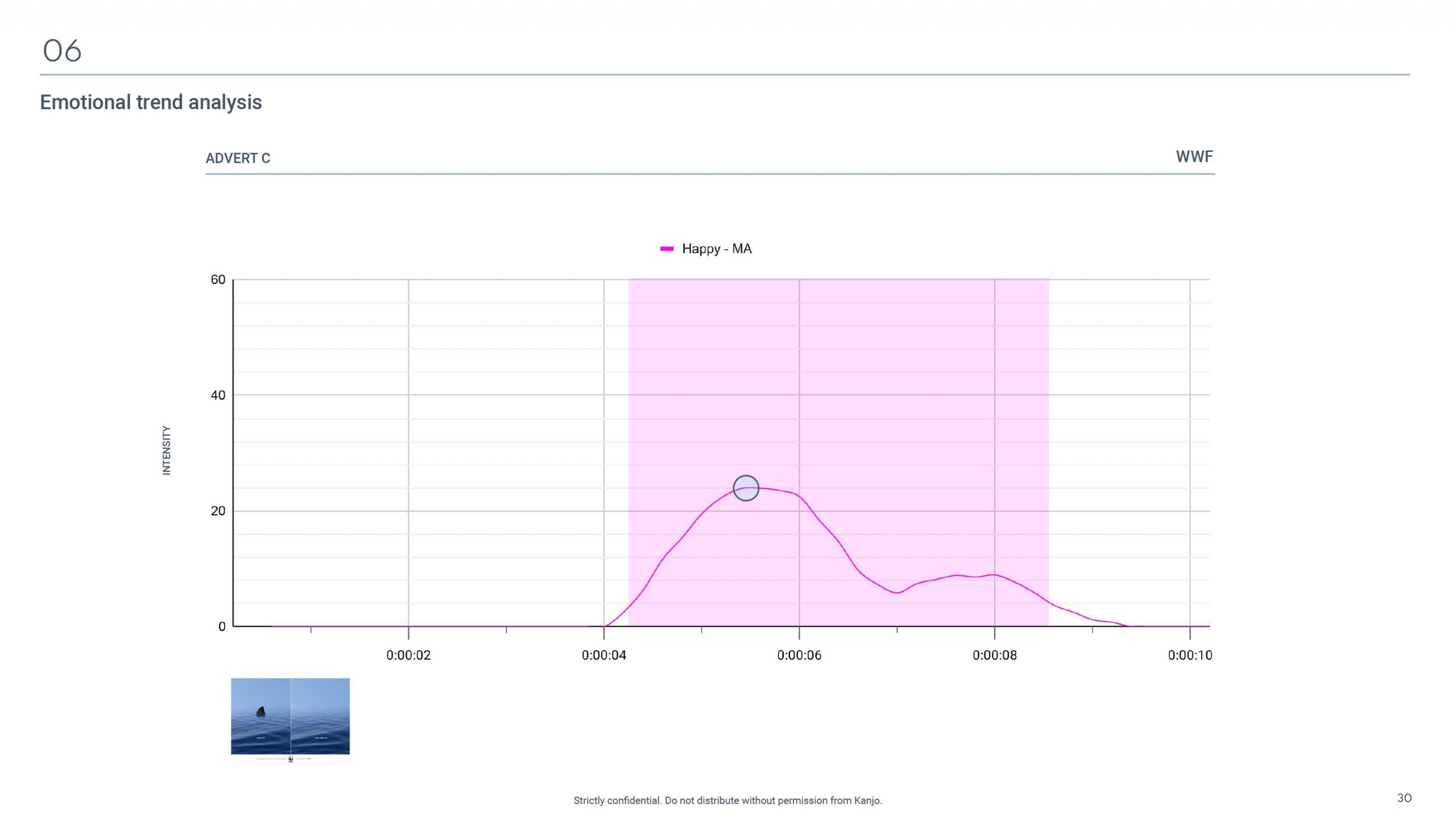 Whilst the Happiness evoked by the WWF advert wasn’t sustained, it does pose some interesting questions as to why there is a peak here. Building from 4 seconds, it could be that what we’re seeing here is the “got it!” moment from the participants — the meaning of the advert coming through as clever.

Interestingly the WWF advert also saw levels of Anger and Sadness, with a particular peak of Sadness towards the end of the advert, indicating that Sadness is the lasting emotion.

The two charts below show the trends of Sadness and Anger in the WWF campaign. 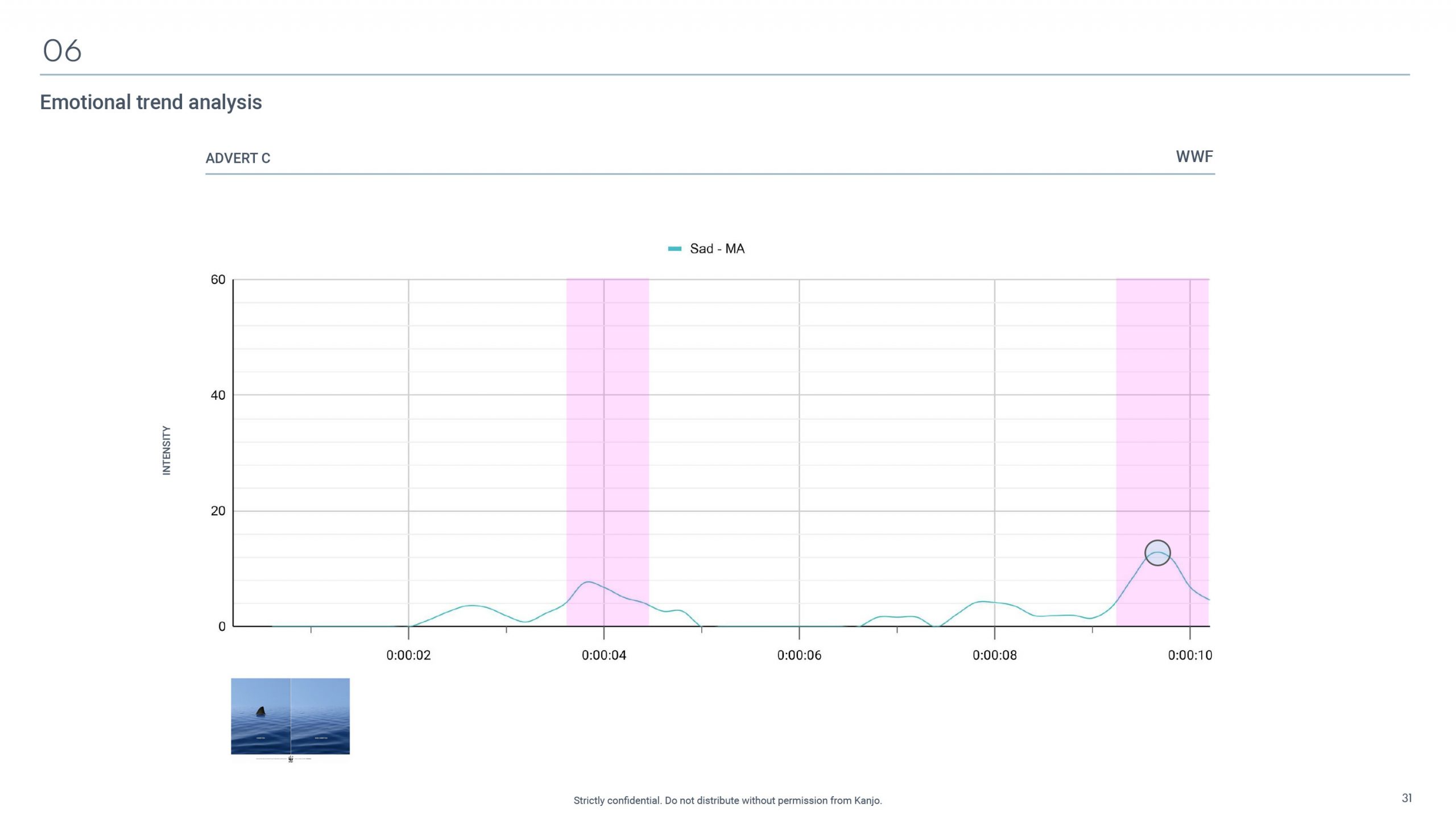 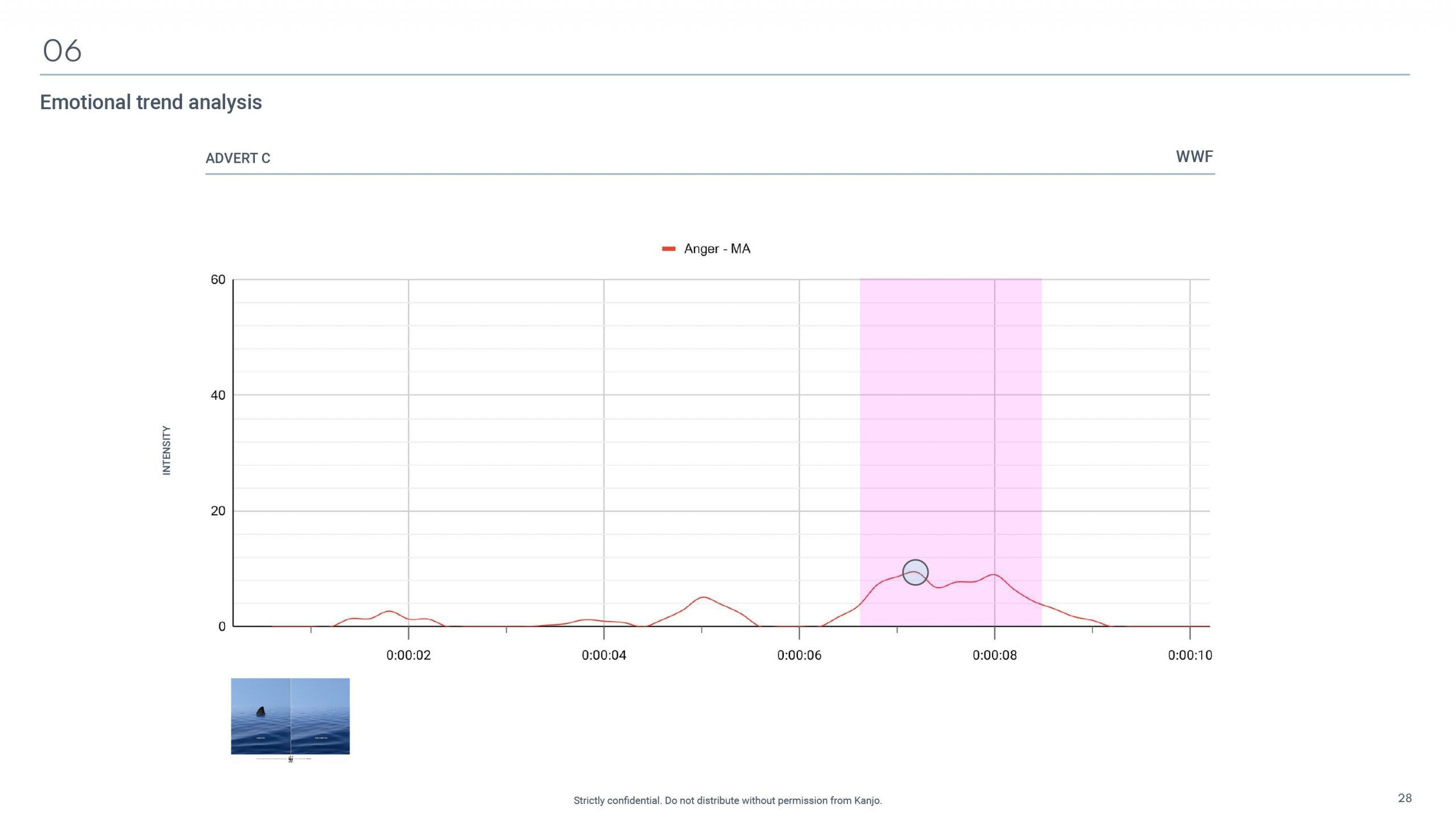 Anger was also present in the WeightWatchers advert. Less intensely than in the WWF advert, but for more sustained periods of time. 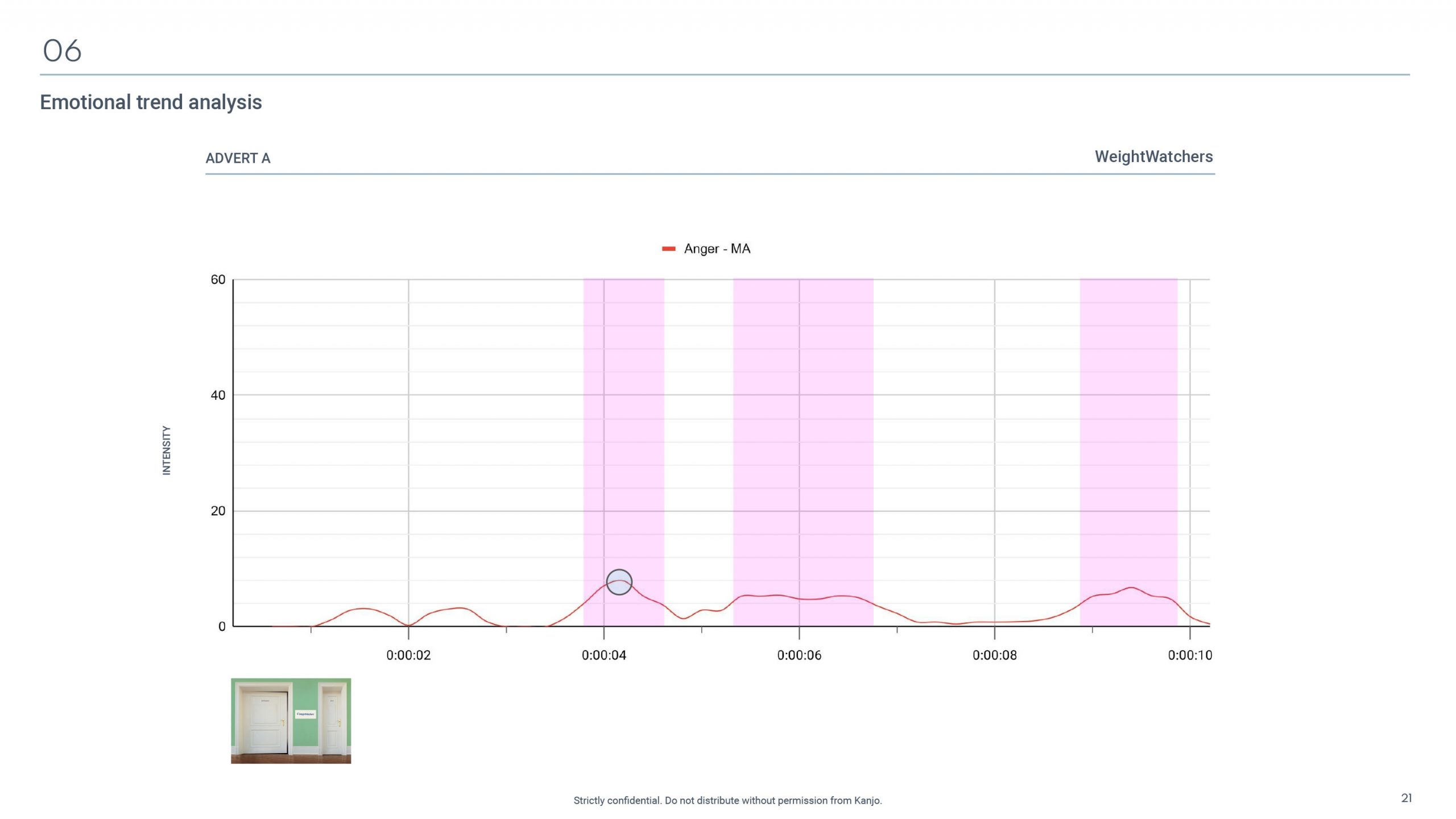 Without context from the brands we don’t know exactly what emotional reactions they were trying to generate. However for both the Pepsi and WWF adverts we would expect them to be similar to that shown in our research study.

Would you like to test emotional reactions and engagement to your static content? It’s a quick way to try creative ideas, providing a safe environment to test left field concepts. Give us a shout to find out more – we’re a friendly bunch that loves to talk human behaviour.