Measuring emotional reactions to Barnardo’s “Believe In Me” campaign

When it comes to emotional advertising the charity sector often pulls hard on the heart strings to grow their supporter base and deliver messages that encourage people to take action.

Over the past few years Barnardo’s haven’t held back at triggering emotions through their content. Particularly hard hitting was their “Believe In Me” campaign that recently dealt with subjects including grief and anxiety within children.

As part of our research and development programme at Kanjo we took two adverts from the campaign and ran a study to measure their emotional resonance. We invited two research groups each consisting of over 100 parents of all ethnicities living in the UK to view the adverts, ensuring that no participant saw both adverts. Anonymising the data and combining the emotional reactions from each group, we mapped emotional trends across the length of each advert.

Note: This study is part of our research programme and wasn’t carried out with, or endorsed by, Barnardo’s.

Triggering emotions is of course a key objective of many campaigns that are developed in the charity sector, but equally as powerful is enabling people to be ‘in-tune’ and aware of those emotions.

Before we show you the analysis it’s worth viewing the two adverts below for context and as you do watch them — see if you can connect and recognise how you are feeling throughout. Do your emotions change? Do you feel different? Can you recognise those emotions?

If you have watched the videos — we think you’d agree that they are, at the least, very powerful. How did they make you feel? Could you connect with those emotions that they instigated?

Our analysis discovered trends of Anger and Sadness to the Grief advert. With Anger running through the course of the advert and tailing off in the last five seconds. 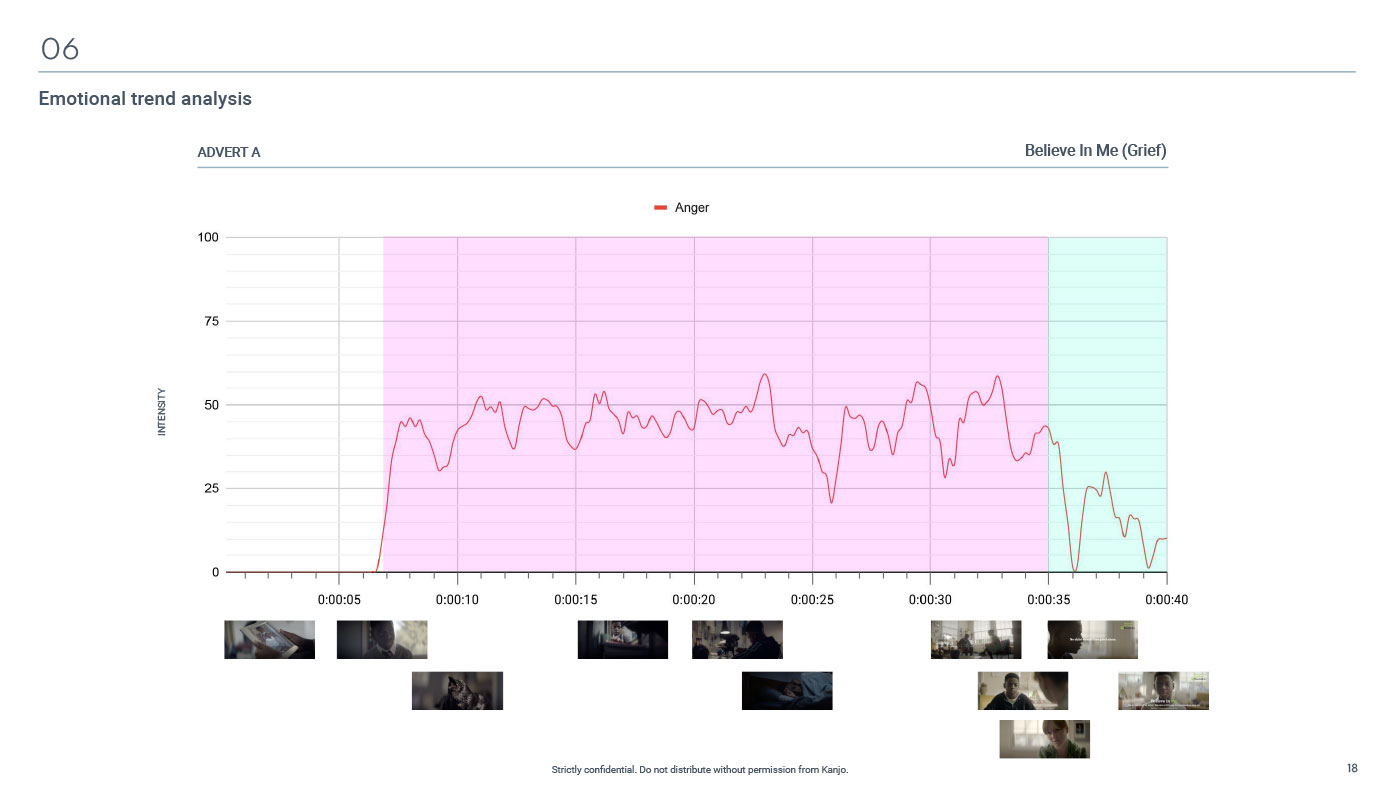 Sadness was found to peak at key moments, again tailing off right at the end. 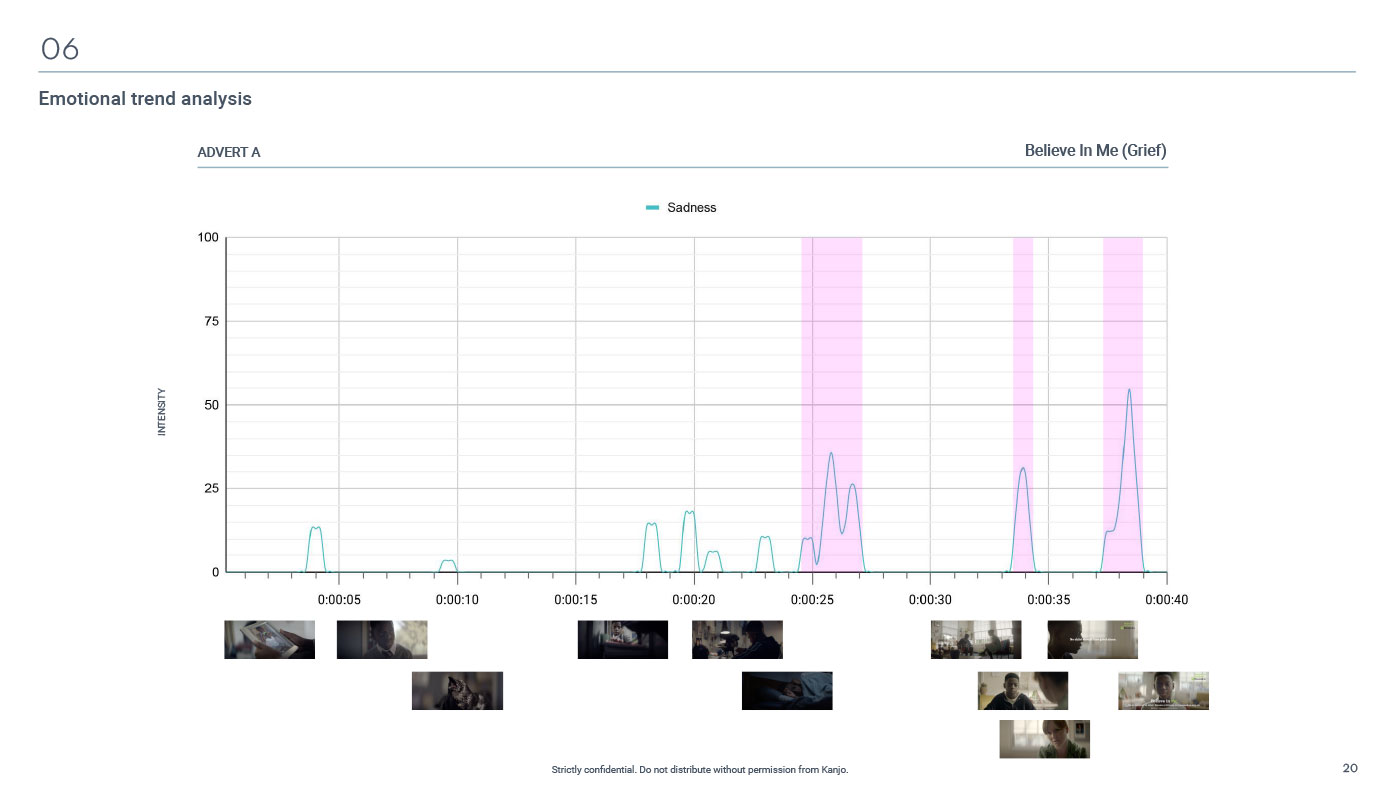 There was also significant higher levels of Cognitive Load from the viewers of the Grief advert, with a score of 28.35 against 5.58 for the Anxiety advert. You can see from the graphs below that more mental processing was required to understand Grief than Anxiety. 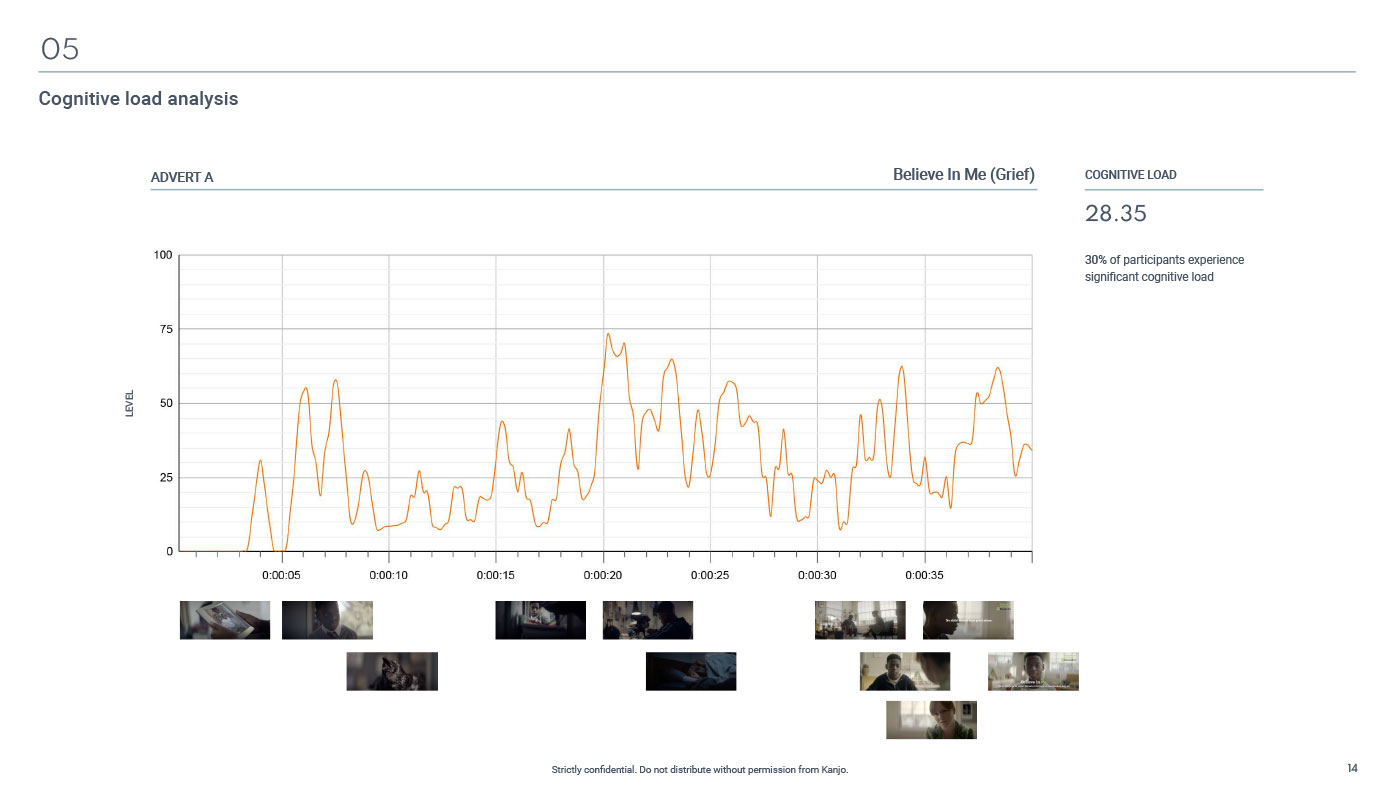 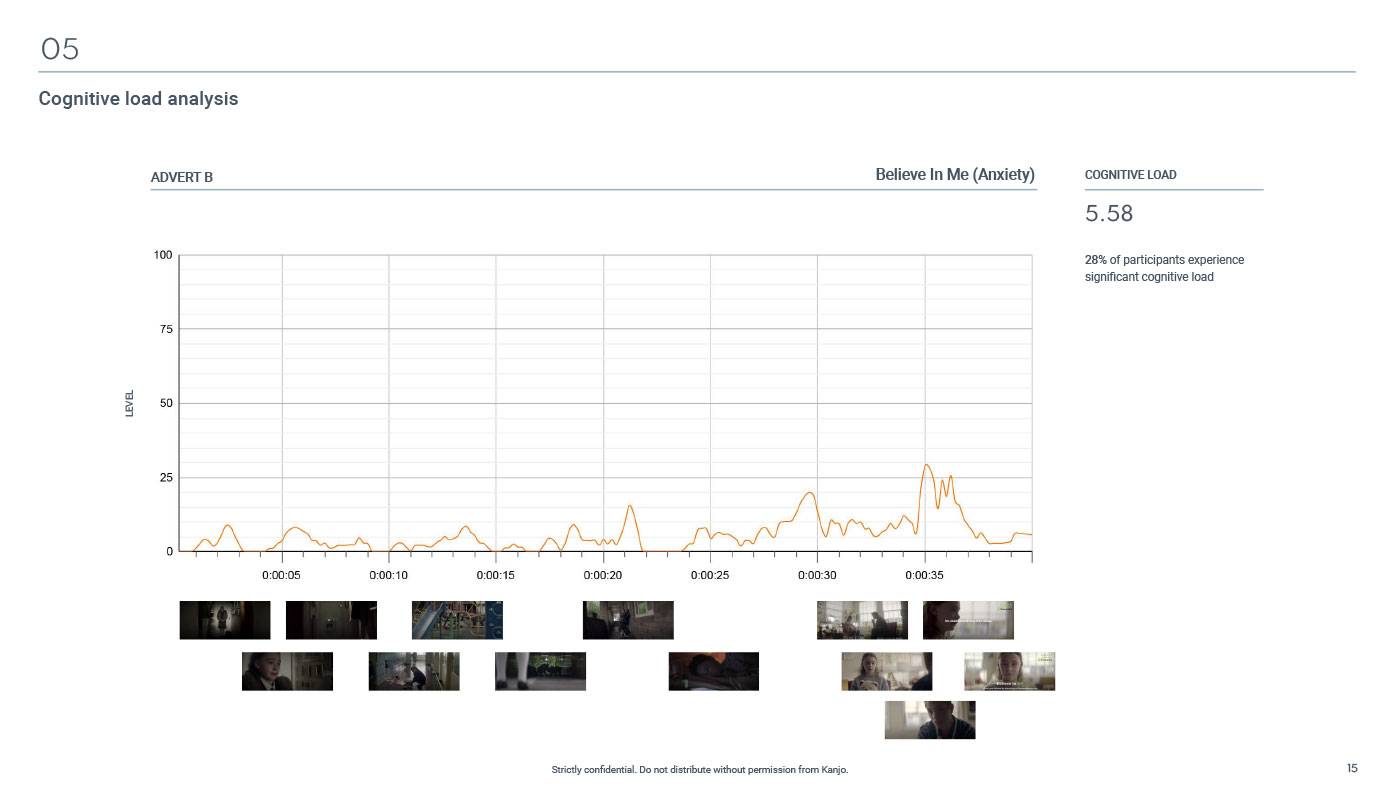 The Anxiety advert prompted peaks of Surprise along with sustained levels of Anger, Fear and Sadness. 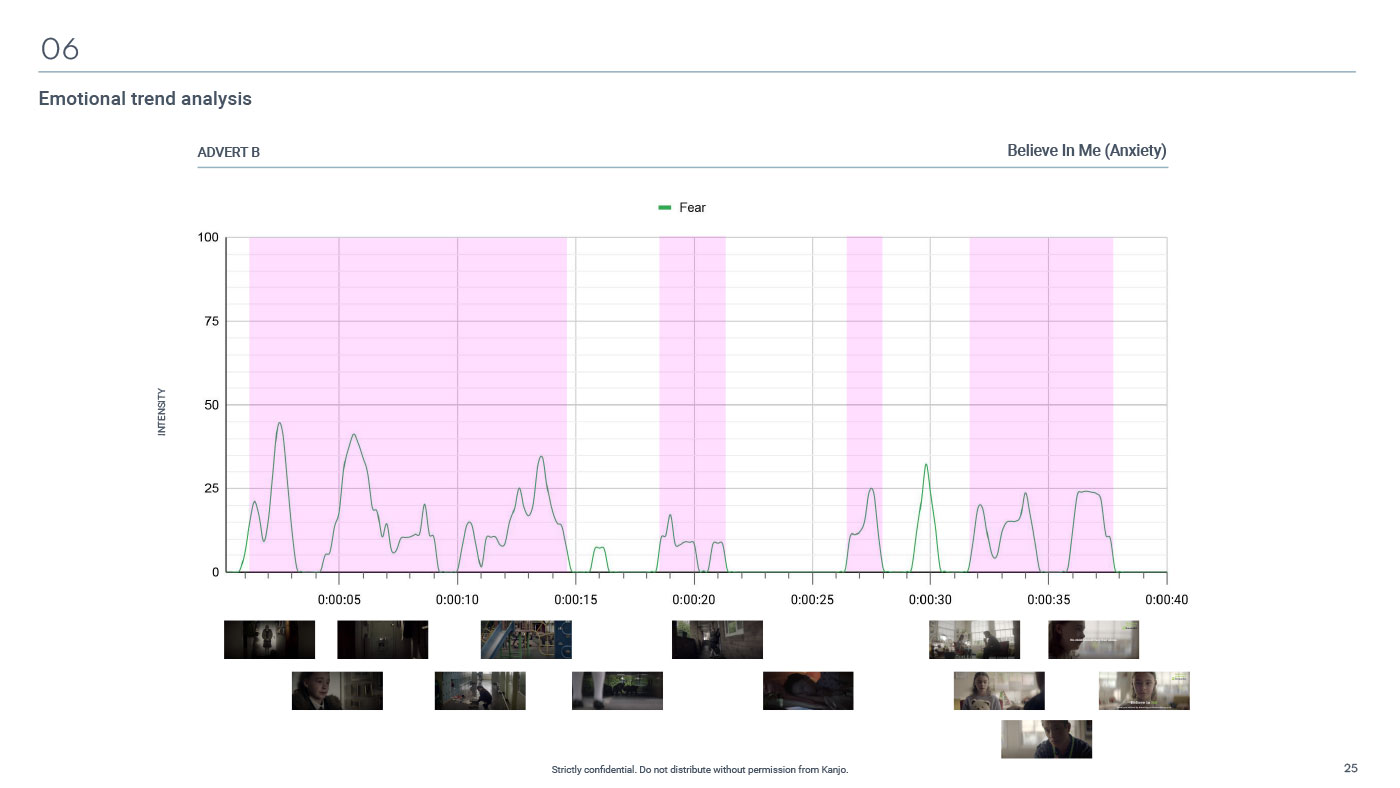 As shown in the chart above Fear was the dominant emotional reaction to the Anxiety advert, experienced with regularity including during the ‘light’ scene at the end. It’s an interesting observation to see that advert for anxiety is generating a strong response of Fear — Fear and anxiety being interrelated. Fear was an emotion that maintained a low presence in the Grief advert. 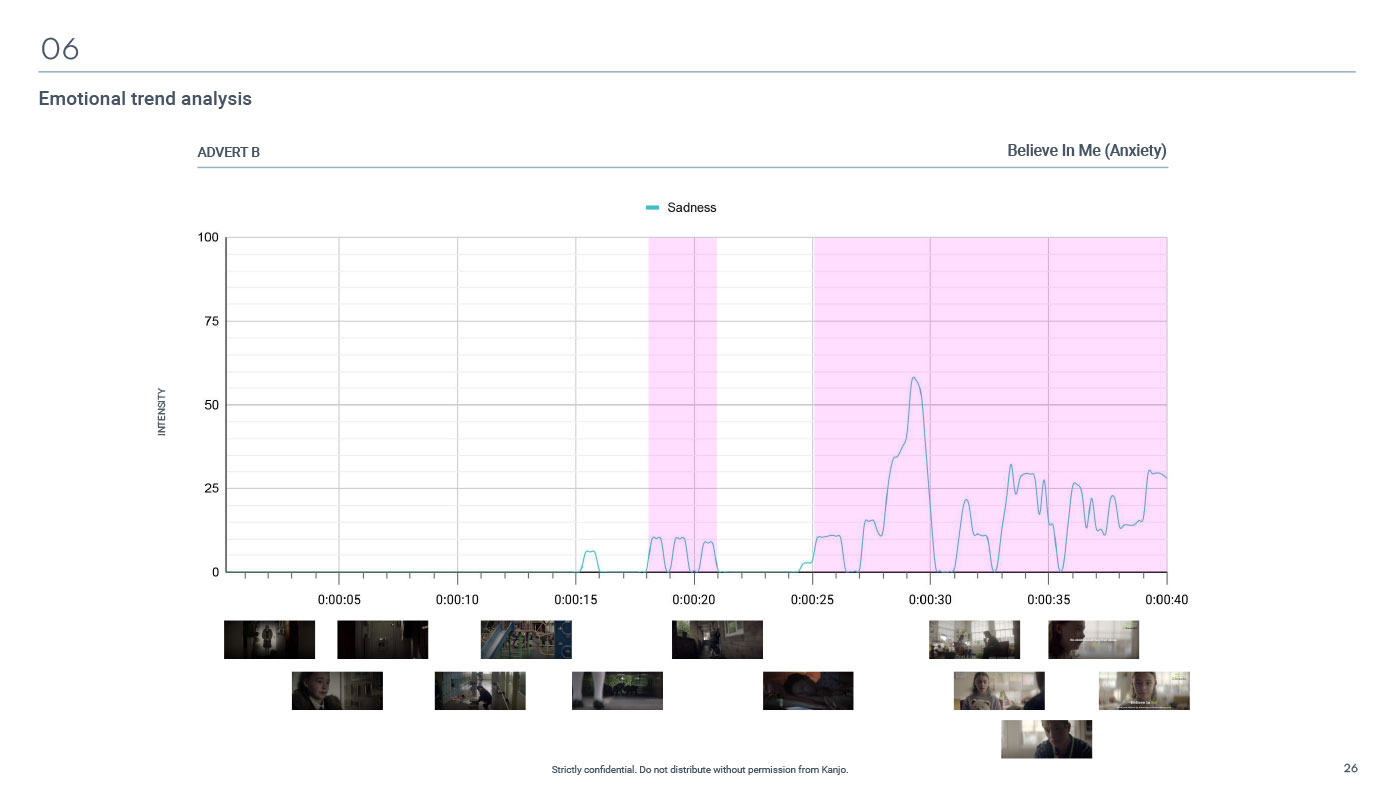 Sadness was experienced during the Hyena chase scene, the bedroom scene and continued into the end sequence, and not tailing off at the end as was the trend in the Grief advert. 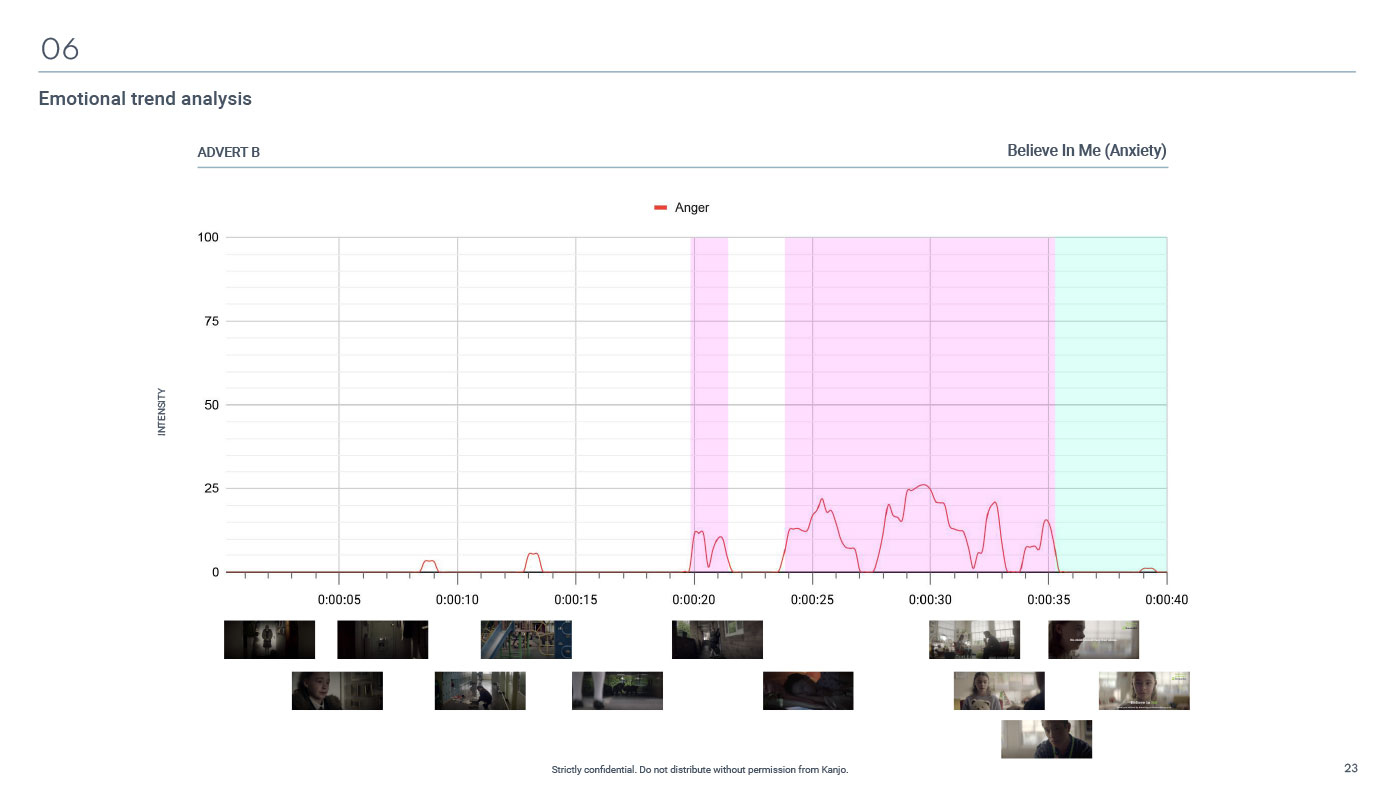 Anger was spiked and sustained following the chase scene. As in the Grief advert Anger was found to tail off towards the end of the advert.

If you would like to view the full report, including measurements of Attention and Engagement, reach out and get in touch. We’d love to take you through our analysis in more detail.