Studying emotional connections to nostalgic advertising in the modern day

If you’re aged over 35 you’re likely to remember the “You know when you’ve been Tango’d” adverts from the 90s. Hugh Dennis, Ray Wilkins and Gil Scott-Heron providing voiceovers to absurd scenes featuring exploding grandmothers and a fat orange man (which proved controversial and was withdrawn at the time, although you can still find it on YouTube).

Fast forward to 2019 and Tango’s “Text Message” campaign. Whilst less absurd and more direct, the advert plays to the same beat as the campaigns from the 90s — again featuring an unexpected character who pops up to disrupt and take the story off on a different arc.

As part of our research and development at Kanjo we ran a study to measure the emotional reactions to one of the 90s adverts (we picked the “Wicked Granny” from 1993), benchmarking against the “Text Message” ad to see how the nostalgic advert performs in the modern day.

Note: This study is part of our research programme and wasn’t carried out with, or endorsed by, Tango or the agencies that created the adverts.

Each advert was viewed by two groups, exclusions were put in place to avoid participants from viewing both adverts. With the data anonymised — and crunched by the Kanjo algorithms — we analysed Emotional Engagement, Emotional Trends and Cognitive Load for each of the adverts.

You can see the analysis below. But first here are the two adverts so you have context. Each one is only 30 seconds long, it’s worth watching each one — thinking about the emotions you are experiencing as you watch them. Do they grab your attention? Do they sustain your engagement over time? How do they make you feel? How easy do you find them to understand?

Kanjo measures Emotional Engagement, both over time and as an overall score. The “Wicked Granny” provided the highest level of engagement, with an overall score of 24.54, hitting a high of 77.08. Engagement also built over the course advert, declining at the end following the explosion replay. 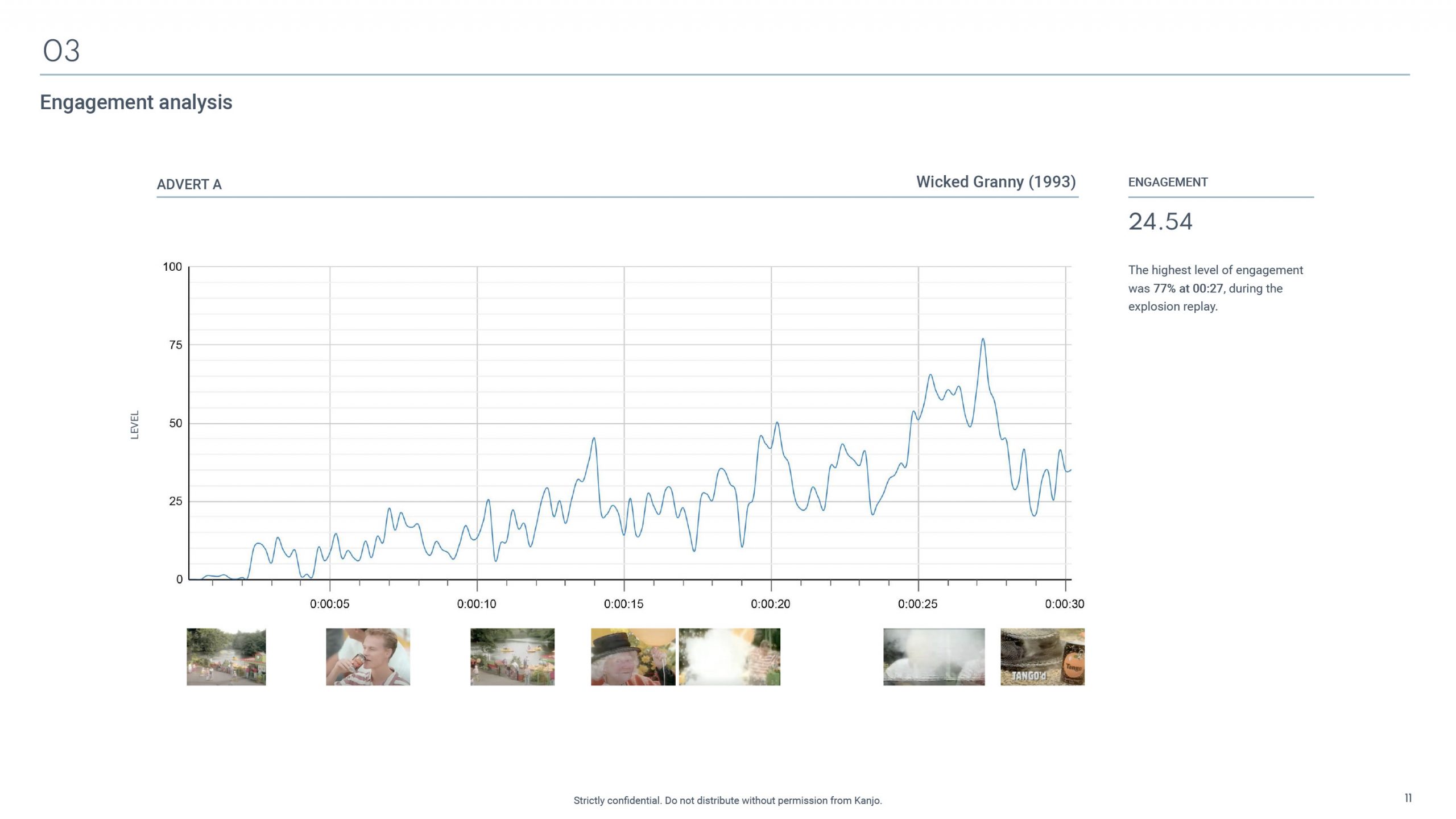 In contrast engagement to “Text Message” was less sustained, peaking during key moments of close ups on the Tango Lady. Significantly there was an uplift in engagement during the final few seconds of the advert, reaching a high of 61.86 with the tagline on screen. 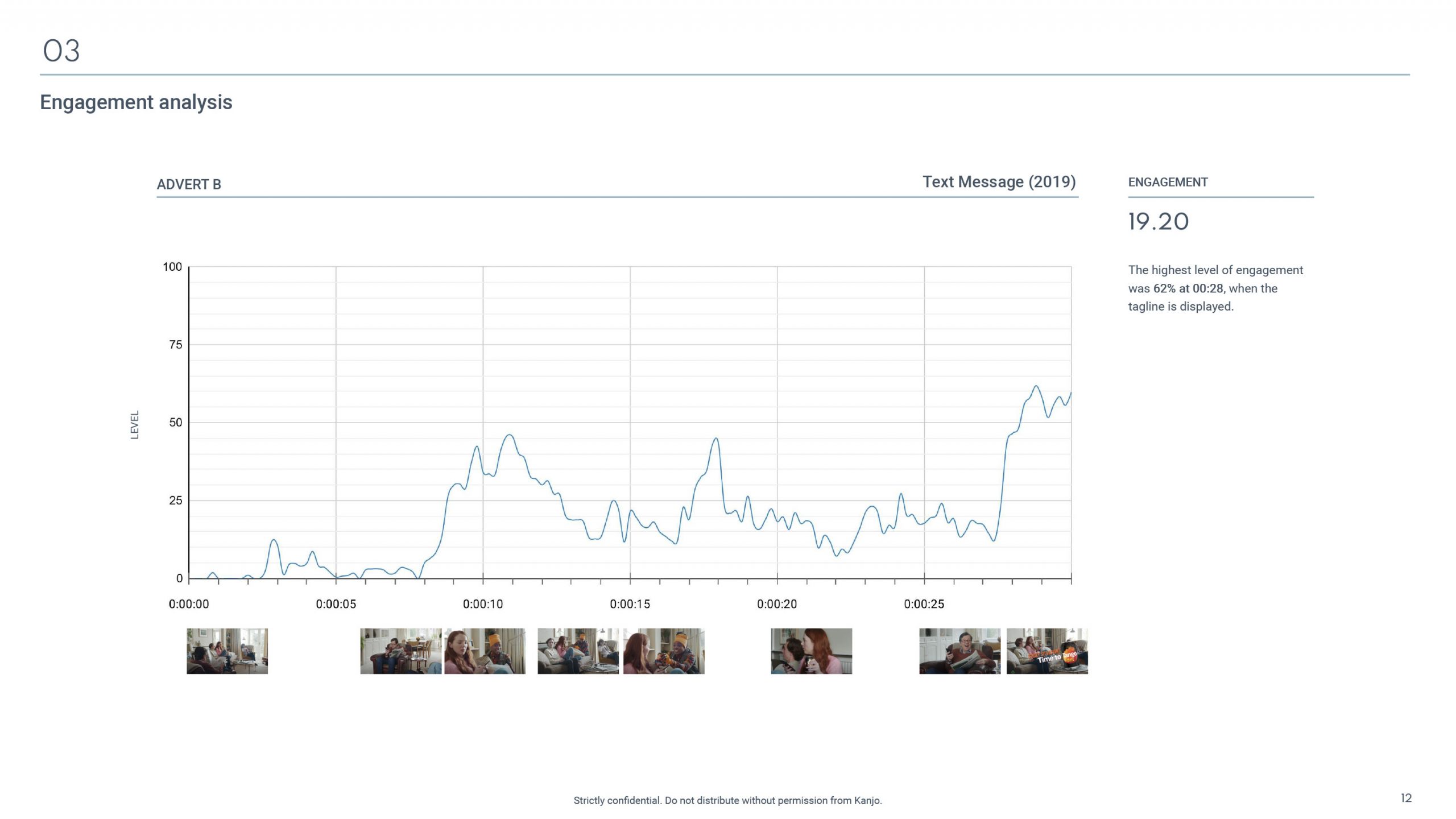 To learn more about why, we need to delve deeper into the emotions that are being triggered for each advert.

You’ll see from the graph below that the “Wicked Granny” advert provided something of an emotional rollercoaster, showing that the audience experienced an inconsistency in emotions in the first 20 seconds. From 20 seconds onwards — following the explosion of the elderly lady — there was a consistent uplift in happiness. Conversely there was also a sustained level of sadness in the final few seconds.

The emotional trends for “Text Message” were much cleaner. Happiness found to be the clearly dominant emotional reaction, with low levels of other emotions being triggered. 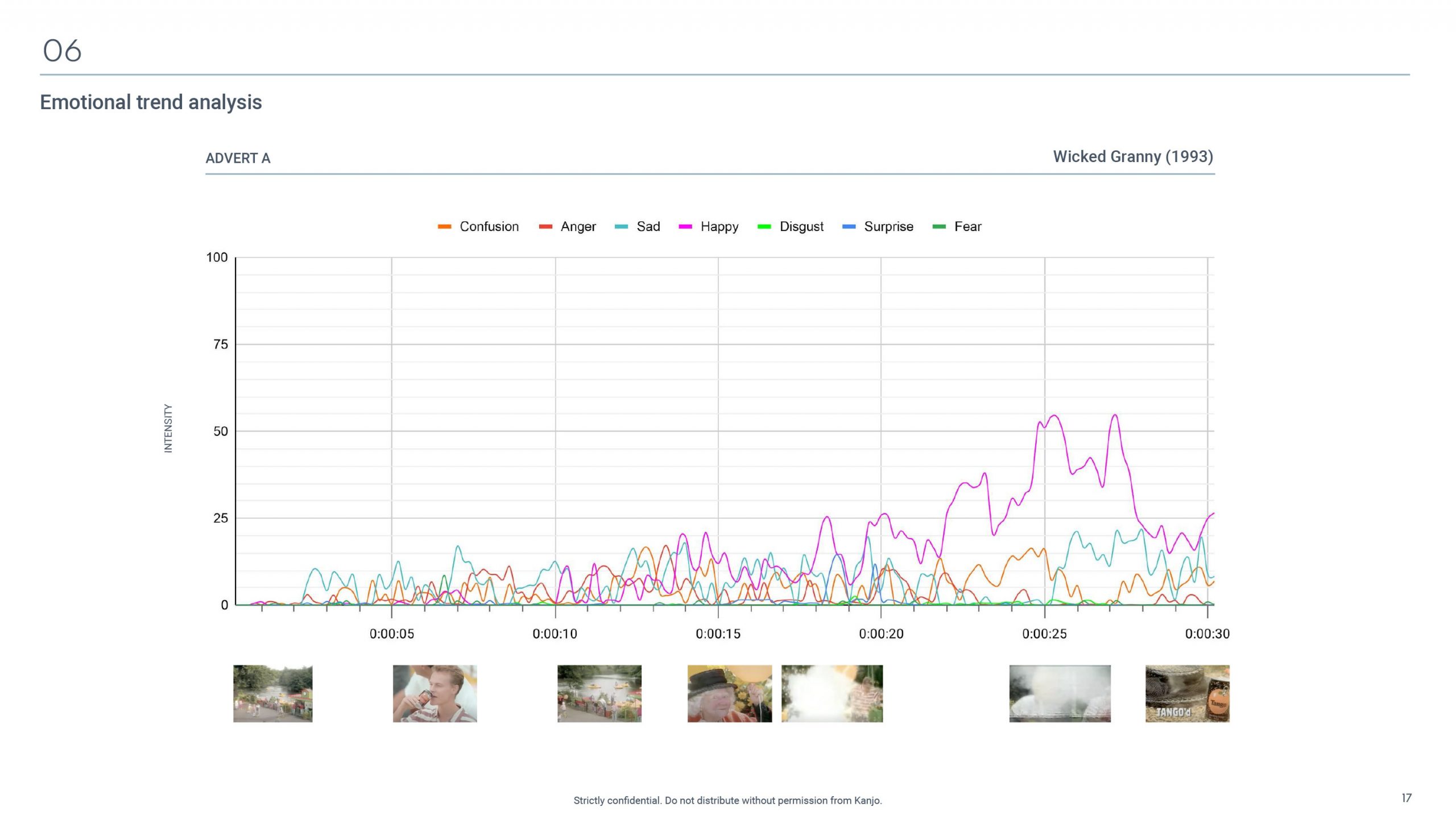 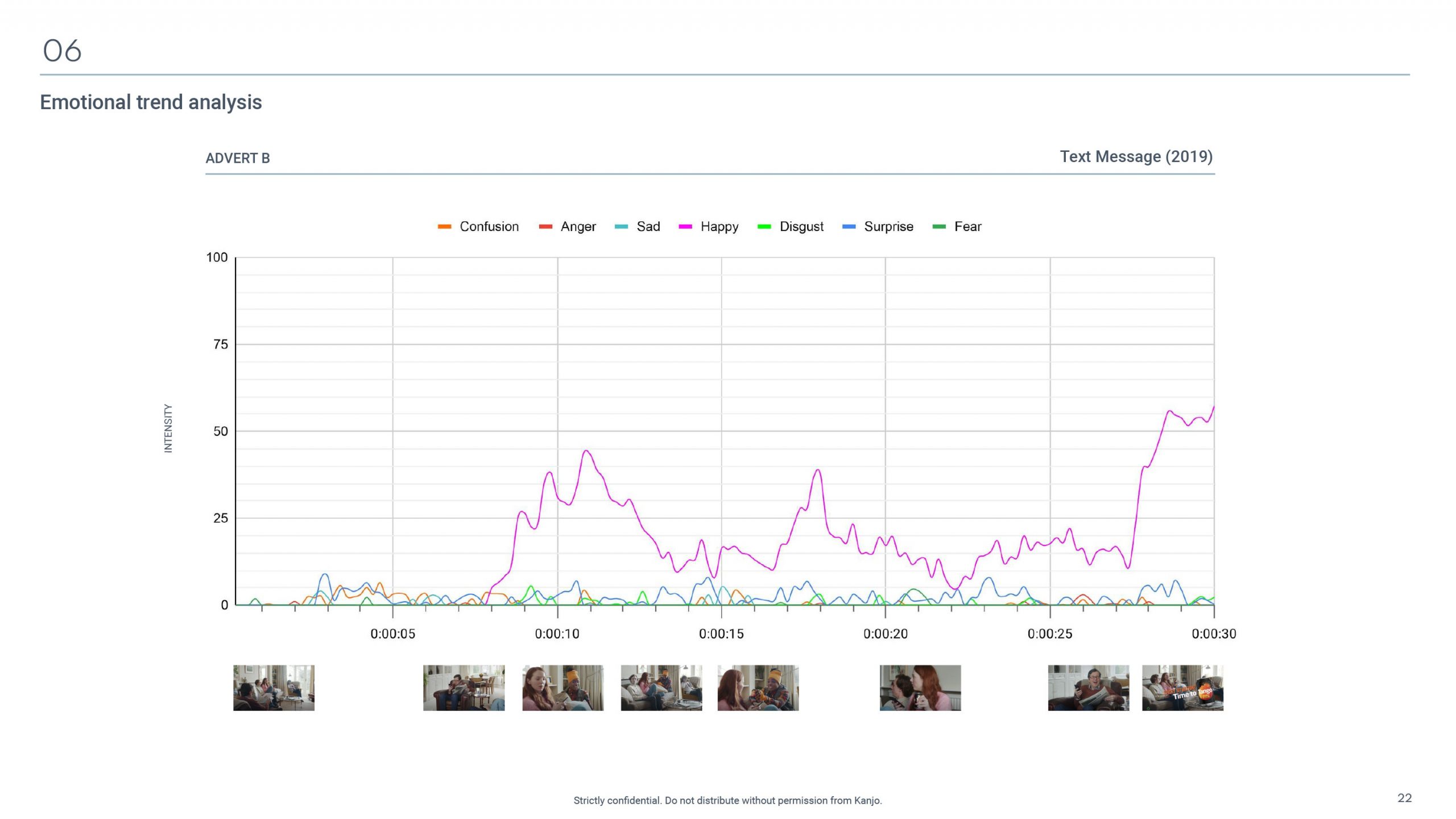 As you might expect from a simpler story “Text Message” was found to be much easier for the audience to understand. Kanjo’s Cognitive Load score ranked better for “Text Message” than “Wicked Granny”. Looking at the graphs below we can analyse the amount of mental processing required to understand the content of each advert. 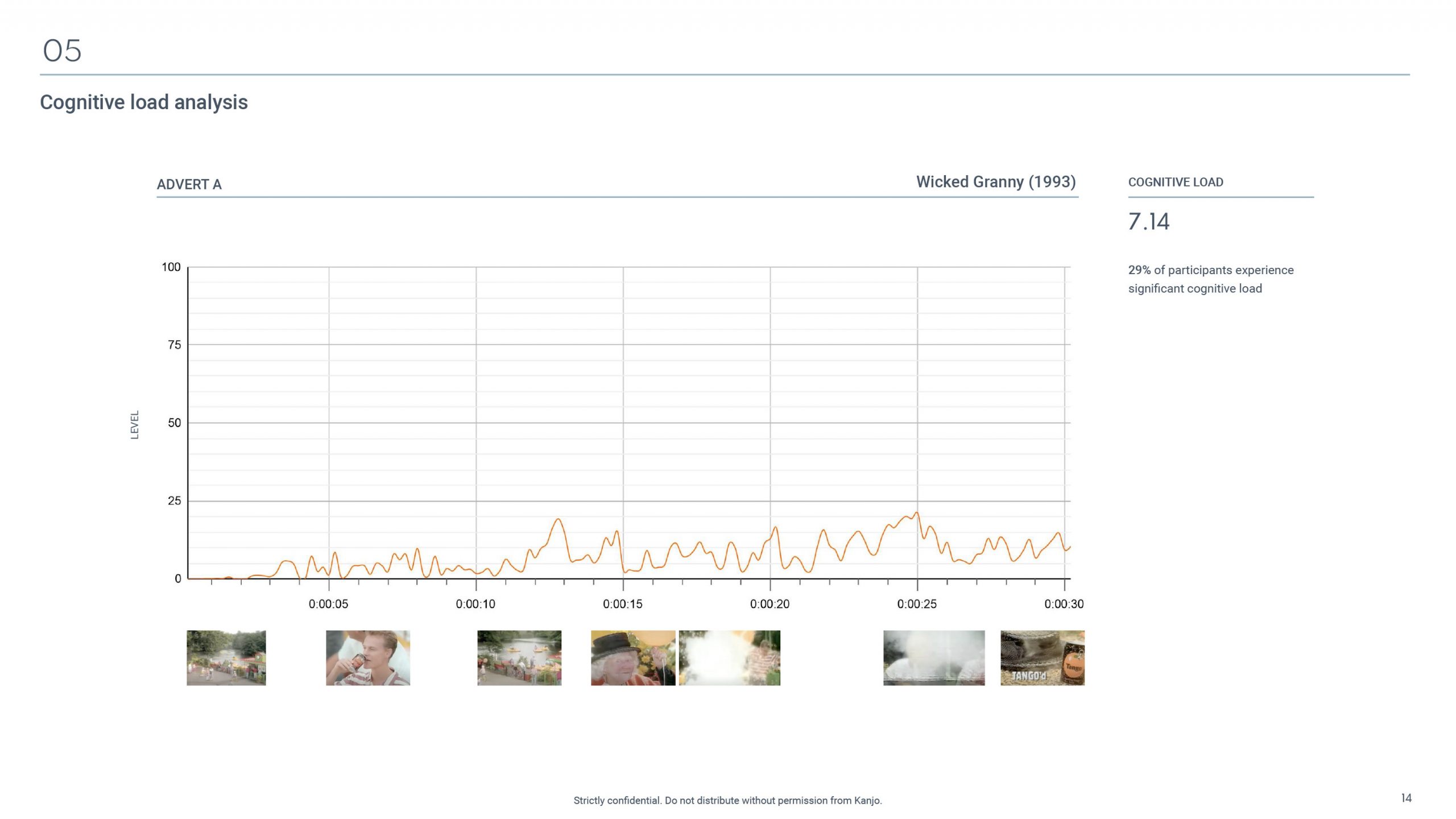 Cognitive Load peaks slightly on “Text Message” when cutting to close ups of the Tango Lady and also with the tagline on screen at the end, although not in any negative way (we would expect to see cognitive load increase when having to read text on screen). 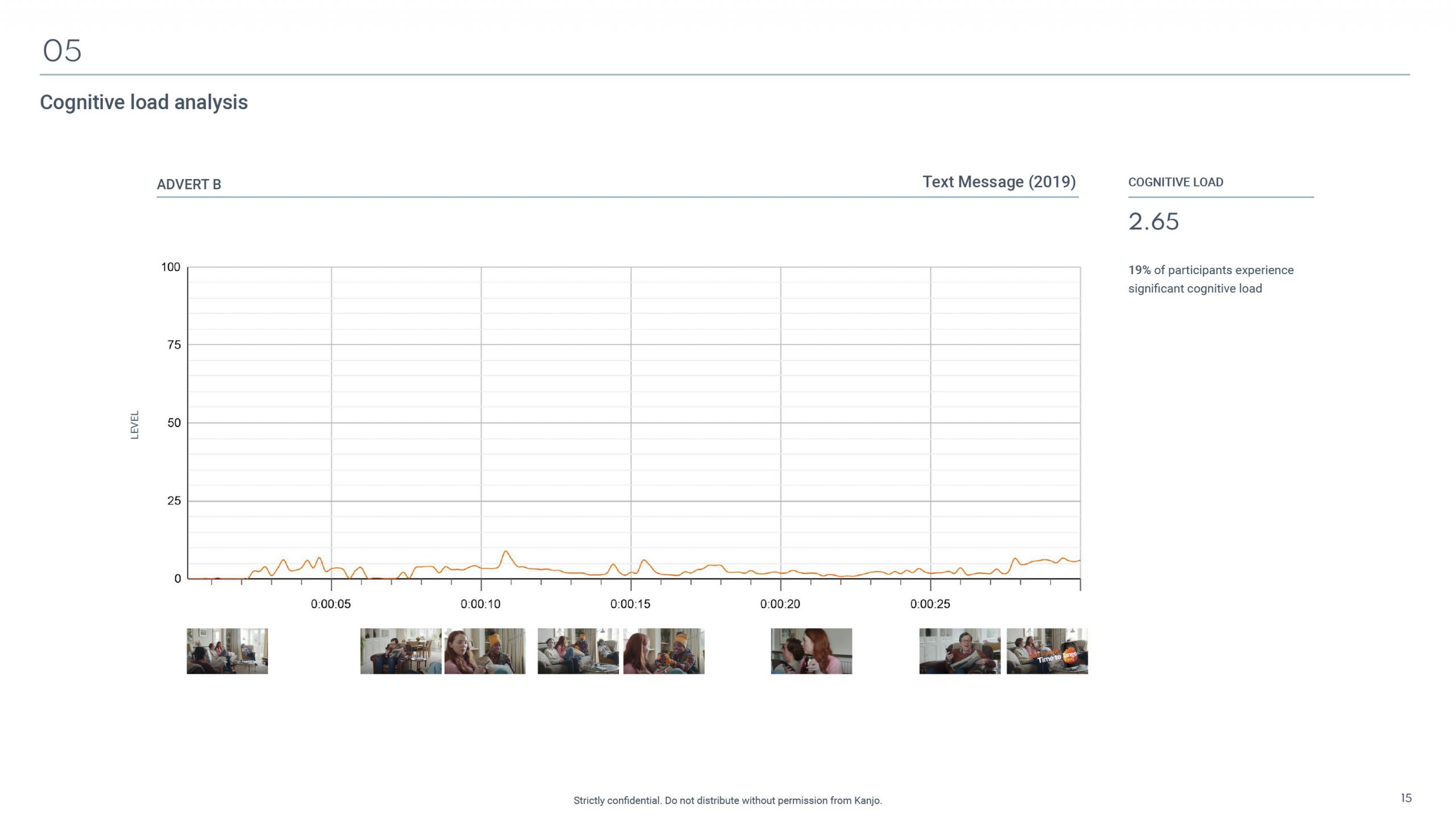 What does this all mean?

Before we do we need to point out that this study was run independently and without context for the emotional reactions that the adverts were aiming for.

Whilst overall Emotional Engagement was higher for the “Wicked Granny” advert, we need to look at two key measurements: the make up of the emotions and the level of engagement at the end.

The clean happiness trend of “Text Message” displays positive engagement. And the uplift of engagement during the final seconds comes in at exactly the right time — the product. Engagement doesn’t pick up until around 8 seconds in, which could lose some viewers. However the peaks of engagement that follow are high, drawing the audience back (indeed if they are on their phone with the TV on in the background).

“Wicked Granny” could be described as chaotic. Eventually happiness punches through as a strong emotion, however it’s not as clean — and therefore less predictable — than “Text Message”. It could be that the chaos and Cognitive Load was entirely intended. However the drop in engagement at the end would put overall performance slightly behind “Text Message”.

If you would like to measure the emotional impact of your marketing content, test new ideas in a safe environment or benchmark yourselves against your competitors — give us a shout.